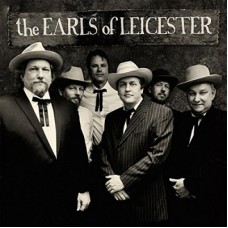 The Earls of Leicester is an all-star band, punningly named for Earl Scruggs and Lester Flatt, whose popular and pioneering bluegrass inspired every one of the musicians here paying them tribute.

Jerry Douglas was inspired to play Dobro because of legendary Flatt & Scruggs dobroist Josh Graves, and Johnny Warren, the Earls' fiddle player is the son of long-time Foggy Mountain Boys fiddler Paul Warren. Every instrument and every vocal hark back to that classic sound.

'This record is something I've been waiting my whole life to do,' veteran Dobro master Jerry Douglas says of this album. Joined by the other veteran bluegrass musicians who comprise the Earls, Shawn Camp, Barry Bales, Charlie Cushman, and Tim O'Brien, each a star in his own right, Jerry has produced more than a tribute to Flatt & Scruggs' classic recordings from 1954-65.

While faithful to the originals,The Earls of Leicestermake this music live again, breathing new life and spirit into these songs, with a fresh appeal both for long-time fans and for a new generation.