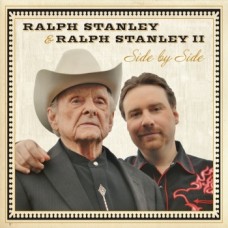 The ancient and the modern converge to create the timeless in Side By Side, the new Rebel recording from vocal titan Ralph Stanley and his gifted son and musical heir apparent, Ralph Stanley II.

Co-produced by the younger Stanley and John Rigsby, a former member of the elder Stanley's fabled Clinch Mountain Boys band, Side By Side is a compelling collection of 14 new and traditional songs. Among the highlights are classics from the pens of A. P. Carter, Charlie Monroe, Albert Brumley and Ernest Tubb and two Ralph Stanley originals as well as samples of Stanley's acappella and clawhammer banjo stylings.

The younger Stanley who is familiarly known as 'Two' began performing (on a miniature plastic guitar) with his famous dad when he was just three years old. He went on to become rhythm guitarist and lead vocalist in the Clinch Mountain Boys in the 1990s. While Two recorded often with his father, this is the first time the two men have released music as artists of equal billing and creative input.