My Love Will Keep - Jonathan Edwards

My Love Will Keep - Jonathan Edwards 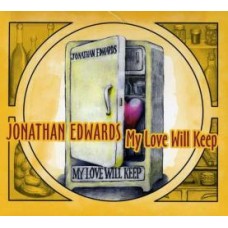 It's taken more than a dozen years for Jonathan Edwards to take time off from his touring schedule and create a new studio CD, but it's been worth the wait. Within the first thirty seconds of Surrounded, the original that opens My Love Will Keep, the rich strum of an acoustic guitar, the sigh of a pedal steel guitar, and Edwards's gentle tenor enfold listeners in a sense of warmth and peace.

In the 40 years since Jonathan's bouncy but draft-defiant Sunshine from his debut LP became a Top 5 hit and gold record in 1971, the country- and bluegrass-influenced Edwards has released numerous albums, most recently live recordings, maintained his fan base with steady touring, and still found time for a temporary retirement or two and side careers as an actor, PBS documentary host, and other creative occupations.

Some of the CD's dozen songs will be familiar to concertgoers, but all shine like new with a lustrous acoustic ambience thanks to the co-production by Jonathan and Jim Begley, sympathetic guest appearances by award-winning bluegrass singer Claire Lynch, Duke Levine on understated electric guitar (among other instruments), vocalist Moondi Klein (formerly of the Seldom Scene), and Jonathan's daughter Grace.