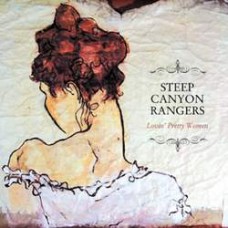 With Lovin' Pretty Women, the Steep Canyon Rangers dig even deeper into a traditional bluegrass sound, but with a sophisticated twist. It's an album filled with the vim and vigor of a band in love with making music.

The new album showcases a band at the top of its game, whether dipping their banjos and guitars in the gospel water of Be Still Moses or telling stories from the coalmines in Call The Captain and Cumberland Moon. The Rangers' compelling harmonies throughout are testament to the band's belief that the voice is as vital a musical instrument as anything with strings.

Whether they're 'Lovin' Pretty Women' or making new fans all over the world, there s one thing the Steep Canyon Rangers will definitely be doing creating timeless acoustic music that honors tradition, while boldly moving it into the future.