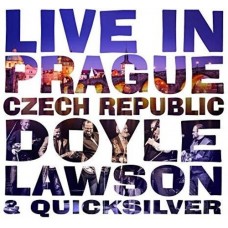 It goes without saying that Doyle Lawson & Quicksilver are among the most celebrated bands in bluegrass. Over the course of the group's nearly 40 year career, they've accumulated a list of accomplishments that rivals any of those garnered by their contemporaries. Grammy nods, repeated recognition from the IBMA, numerous festival appearances, and a cameo appearance that found them guesting with Paul Simon on his song, Dazzling Blue, all add credence to an already rich resume.

Still, for those who may be new to the fold — although it's hard to imagine anyone who's still unknowing at this point — Live in Prague from Billy Blue Records, makes the best case for continuing credibility. What's especially evident here is the band's universal appeal; recorded in the Czech Republic — hardly a place one might normally expect to encounter a ready number of bluegrass boosters — it finds Lawson and company making a decidedly emphatic impression. The audience is heard applauding after practically every solo, and the group's upbeat enthusiasm, especially on songs such as Driving It Home, Back in My Baby's Arms Shenandoah Breakdown, Clinch Mountain Backstep, and Jealous, all attest to the fact that they're feeding off the crowd's effusive embrace.