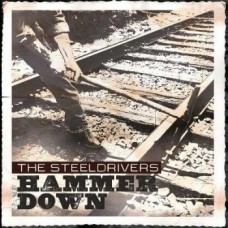 The three time Grammy nominated bluegrass meets soul band Steeldrivers has threaded the roots of bluegrass music with the distinctive threads of their own design, bringing together country and soul to create their own unapologetic hybrid of new music with the old feeling. Hammer Down, the Steeldrivers' third release on Rounder Records, is set for release February 5, 2013.

The SteelDrivers' brand of bluegrass intense, dark, poetic, and inescapably human is a refreshing reminder of the timeless power of string band music, and is captured perfectly on the new Hammer Down. The band has gone through a few changes since they first hit the national scene in 2008 with their self-titled debut, but their songs and sound remain fresh and powerful.