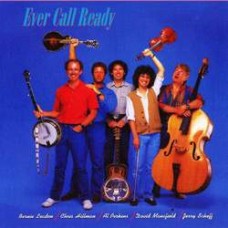 What have Al Perkins, Chris Hillman and Bernie Leadon got in common Well for one they were all involved in the genesis of the Country Rock scene which sprung out of Southern California in the late 60's and early 70s and variously played with The Byrds, Flying Burritto Brothers, Gram Parsons, The Eagles, Crosby Stills and Nash, Manassass, Linda Ronstadt, Emmylou ... the list goes on.

The other thing thesethree master musicians share is love for bluegrass and roots music. In 1985 along with David Mansfield and Jerry Scheff they recorded an album called Ever Call Ready which was barely noticed at the time but has now been afforded a timely re release by Sierra Records.

Ever Call Ready is a collection of bluegrass and old time songs and tunes with a Christian/Gospel theme. The album is marked by strong male vocal harmonies and excellent tempered use of solo instruments.

Mandolin (Hillman), Banjo (Leadon),Dobro (Perkins) and Fiddle (Mansfield) are used tastefully both to augment the rhythm and to compliment the melodies.These guys are masters of their instruments and a pleasure to listen to.

The music includes traditional pieces such as I'll Be No Stranger There and Panhandle Rag and songs by writers such as Don Reno and Flatt & Scruggs. The version of the the Flatt & Scruggs song God Loves His Children is as good as it gets in terms of driving bluegrass music.

In contrast there is the tender ballad Rule Over My Soul which would be equally at home on one of Gram Parson's solo albums.

In short Ever Call Ready is a treasure both for pure listening enjoyment and as a master class in bluegrass harmonies and instrumentation. ~ Gerry Fitzpatrick (Sick & Indigent Song Club)