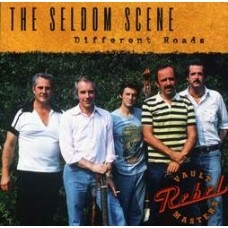 The Seldom Scene were the trailblazing originators of 'urban bluegrass,' taking a music that was largely rural and Southern in scope, and making it accessible to a much wider and diverse audience.

Their first seven albums are considered masterpieces and influenced a generation of roots-based musicians, including Emmylou Harris, Linda Ronstadt and Ricky Skaggs. Different Roads culls fourteen of their classic recordings, pulled from those landmark albums.

This 2007 'Best Of' collection features their most requested songs along with their fine treatment of the Norman Blake classic Last Train From Poor Valley. There are also a few lesser known yet equally powerful performances including Starling originals, Gardens And Memories and Different Roads, both featuring his distinctive, rich and soulful voice. In contrast, John Duffey's superb tenor is heard leading on other tracks.