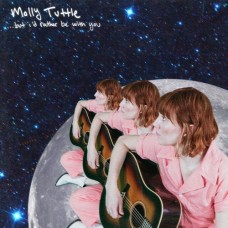 A virtuosic, award-winning guitarist with a gift for insightful songwriting, Molly Tuttle established herself as a new artist to watch with her boundary-breaking debut album, When You're Ready.

In March 2020, the Nashville-based artist experienced the devastating tornado that tore through much of East Nashville, followed by the global pandemic. Tuttle, who grew up in California and has toured as a solo artist for years, suddenly found herself along with the rest of the musician community sheltering at home. She found solace in revisiting favorite songs from throughout her life in an attempt to "remind myself why I love music."

The result is 10 tracks that cross the musical spectrum and the decades, from FKA Twigs to Cat Stevens, from Rancid to Karen Dalton, that will be released as But I'd Rather Be With You on Compass Records.

Tags: But Id Rather Be With You Molly Tuttle