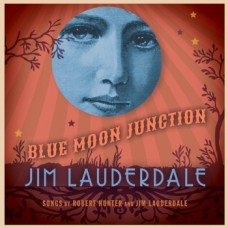 Blue Moon Junction is the third in a series of albums released by Lauderdale this year.

Lauderdale is a Grammy Award winning musician and one of the most respected artists working the Bluegrass, Country and Americana music communities today. He is considered one of Nashville's 'A' list of songwriters with songs recorded by artists such as Patty Loveless, Shelby Lynne, Solomon Burke, The Dixie Chicks and George Strait, who has had numerous hits with Jim's songs.