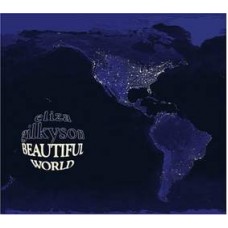 Beautiful World is Eliza Gilksyon's first new studio release since her award-winning Paradise Hotel of 2005. An evocative blend of the upbeat and topical, the new album celebrates the beauty that shines amidst the dark days of war and corruption, and builds on the Grammy-nominated songwriter's rising importance as one of America's greatest roots artists.

The seeds for Beautiful World sprang from a monthly gathering of community forums Eliza hosted at venues around Austin, which covered a broad range of topics, including politics, art, spirituality and the environment.

Gilkyson says; 'The first song I wrote was Great Correction, which I penned as a way to console myself as I grieve the devastation of the human and natural world.' This anthemic song spurred a whole cycle of tunes about perseverance and hope for a more beautiful world.