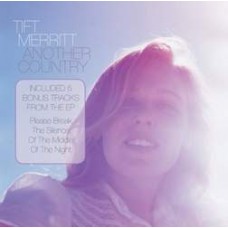 International edition of her third album, originally released in North America in 2008, includes five bonus tracks from her EP, Please Break the Silence of the Middle of the Night, previously only available as an I-Tunes US exclusive. Bonus tracks, Morning Is My Destination, Tell Me Something True, I Live for You, Wayward and Weary and Last to Know. Merritt describes the writing on this album as a plain spoken look at the distance we all attempt to cross between two people, between one heart and the rest of the world. After two records and a Grammy nomination, Tift Merritt took hiatus with a piano in Paris and she was rewarded with unbridled inspiration plus a wealth of her most accomplished songs to date. These songs together comprise Merritt's third recording Another Country. Merritt's debut Bramble Rose earned spots on both Time Magazine and the New Yorker's year-end Top Ten lists. Tambourine, her sophomore album, was Grammy nominated for Country Album of the Year and it earned numerous accolades from press and fans.