This Highway - Zephania Ohora With The 18 Wheelers

This Highway - Zephania Ohora With The 18 Wheelers 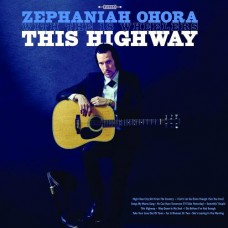 If you pick up a copy of This Highway, the new album from New York-based Zephaniah Ohora with the 18 Wheelers, you might feel that you have stumbled upon a lost album from Merle Haggard and The Strangers circa 1973. Ohora takes that statement as the compliment that it was intended to be.

'I have a band - and we play weekly, about three hours a week, all Merle Haggard songs; a pretty broad range from the '60s all the way up through the 1990s,' the singer admits to Billboard. 'I grew up in the church, and played music since I was a kid, and I've gotten into all kinds of genres and music. I didn't grow up listening to Merle Haggard, but when I first heard it, it spoke to me. I've been collecting country records, and listening to it for about fifteen years, and I think Merle's catalog really captured the country sound in a way that remains timeless.'

'It was just a goal to capture the moment with the musicians we had at the time,' Ohara says. I just wanted to make a record that I would enjoy listening to if it wasn't me. I think that people get a little hung-up on the throwback sound where they want to hear something modern and fresh, but I think country music is unique in the sense that you can still follow the format, and play it how it was initially meant to be played - especially during the '60s, which was the golden era of it.'

Tags: This Highway Zephania Ohora With The 18 Wheelers