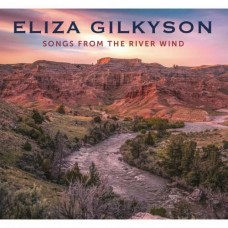 Renowned songwriter and two-time folk Grammy nominee Eliza Gilkyson has announced the follow-up to her critically acclaimed political masterpiece, 2020, which topped the US folk radio charts.

Her new album, Songs From the River Wind, is what she calls her love letter to the Old West. It's composed of snapshots of the people and places, lives and loves lost and found over her years of wandering the West as a musical minstrel, searching for her heart's home.

Feeling the need to take a little break from the socio-political music that she felt compelled to write for her last six albums, the twice Grammy-nominated artist moved her base from Austin, TX to Taos, NM. Inspired by memories of characters and events that birthed her enduring love affair with the West, the songs span 40 years - from originals to vintage classics - and culminates with her recent decision to relocate permanently to Taos, where she is sinking down deep roots at long last.