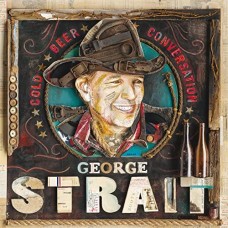 George Strait has surprised everyone in the music industry with the release of a new studio album within just a few days of the news being made public!

Cold Beer Conversation is Strait's first studio album since 2013's Love Is Everything. The 13-track project was produced by Strait and Chuck Ainlay and includes songs written by, among others, Jamey Johnson, Brandy Clark, Bill Anderson and Strait's son Bubba.

'I'm really, really proud of this new album,' Strait says. 'I think it's a great record. I always say this: I think it's one of the best records I've done. I always shoot for that ... You've gotta go in the studio thinking that way. So I'm very excited about that.'

The CD is available exclusively through WalMart stores in the US.