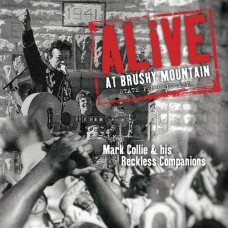 In 2001, singer-songwriter Mark Collie, with the accompaniment of an elite band of musicians, was spurred to perform at Tennessee's Brushy Mountain State Penitentiary – one of America's most notorious penal institutions up until its closing in 2009. The reason: to spread the infectious vibe of hope and redemption.

Drawing inspiration from country icon (and good friend) Johnny Cash, Collie took note of not only Cash's celebrated 1968-69 live albums recorded at California's Folsom and San Quentin prisons, but how his 1958 performance affected Inmate #A-45200: the man the world now knows as Merle Haggard. 'Without Johnny going to San Quentin,' Collie says, 'there might not have been a Merle Haggard. A lot of lives were changed or made better as a result of that music.'

It was this transformative quality that moved Collie to undertake a live prison recording. He wrote a batch of songs focusing on themes of crime and punishment just for this event, exploring the lives of those incarcerated with poignant detail and compassion.